Welcome to the second issue of Notes ‑Books ‑ Authors. It gives me great
personal pleasure to be involved in this issue as it is devoted to New
Zealander Winifred (McQuilkan) Hall, who as Clare Mallory wrote some superior
school stories published in the late nineteen forties and early fifties.

I first met Clare Mallory and Merry, when, at the age of thirteen, I was
given a hand‑me‑down, much loved copy of Merry begins. I was
captured immediately by the story, the characters and the setting. When I was a
child my family used to make the pilgrimage by ferry and train from Wellington
to Dunedin, to visit my Grandmother. Merry begins brought back many
happy memories of the train trip and of Dunedin.

I remember being disappointed that the public library had no more books by
Clare Mallory. I was delighted, years later, to discover that there were more
books by this author. They worked their magic with me still and made me more of
a fan of Clare Mallory than I already was.

” I still need three titles to complete my collection, so if anybody has
spare copies a good home is assured. 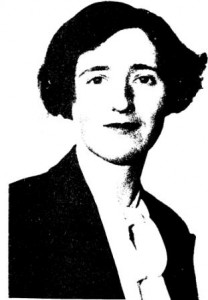 Winnie was born Winifred Constance McQuilkan and I first met her in 1924
when my parents moved to Invercargill and I was sent to Middle School. We were
both ten and in standard five, our teacher the
almost‑never‑to‑be‑forgotten Miss Murphy, our headmaster the dignified
Mr Featherstone. ‘A pupil head and shoulders above the rest of the school’ he
was to say of her.

We became friends. We were both only children (though some years later my
mother was to have another child who insisted that Winnie, too, was her sister)
and we were both devoted to books and reading, especially of school stories.
Each week we bought the schoolgirls’ paper, the School friend and I
think the pupils of Cliff House, Babs, Mabs, Bessie Bunter et al were more real
to us than our own classmates.

We liked to write. In those days the Invercargill Competitions included
essays and stories and we both competed with some success. We both wrote for
Cousin Betty’s page in the Southland Times. Later The pen and
pencil girls owed something to our activities and is of course dedicated
to the ” writers and artists of Cousin Betty’s page, Southland Times,
Invercargill, New Zealand”.

At the end of my standard six year my parents moved to Dunedin and for the
next five years I saw Winnie only when she visited us in the school holidays.
Early in her third form year at Southland Girls’ High School her mother died
and a little later, her father. Winnie spent the next nine years of her life in
private board. Her only experience of home life was in holiday time with her
aunt, uncle and cousin, and occasionally with friends. This, I think, is
important in the light of the criticism of her first school story.

We came more permanently together again at Otago University. Winnie had been
dux of Southland Girls’ and had won a university entrance scholarship. She was
probably the brightest woman student of her year. Her great love was the
Classics, her great rival in that department, Dan Davin, also from
Invercargill. Winnie also became well known in the university for her disarming
contributions to the Critic as Susie Schnozzletippet.

She left with two Master’s degrees, First Class Honours in English, the
Macmillan Brown prize and Second Class Honours in Classics. She had won a
post‑graduate scholarship and was off to Oxford and Lady Margaret Hall. For
many years afterwards it seemed that I had only to mention a contemporary woman
writer for Winnie to remark casually that she had known her at Oxford, and to
provide some background information. I well remember once when I had a group of
women friends to lunch and we were discussing the role of women in India ‑the
stunned silence that followed her quiet observation that the only Indian woman
she knew was Indira Ghandi!

Back in Dunedin with more First Class honours, Winnie taught for a time at
Otago Girls’ High School before becoming the very young Headmistress of Columba
College. This appointment, with that of the even younger Margaret Dalziel at
Saint Hilda’s created considerable interest in the city and I think that Winnie
felt for some time that the eyes of Dunedin were upon her; however, Frank, she
wrote, was being a great help.

Frank was Dr Frank Hall. A brilliant, unassuming scholar, he had graduated
Master of Arts at the same time as Winnie, after which he had studied medicine.
When the war ended they were to marry.

It was while she was at Columba College that Winnie wrote Merry
begins. Each week the boarders spent time packing parcels for Britain.
These had to be encased in unbleached calico and sewn up with red wool. The
juniors found the work tedious and so she read to them. But she could never
find a story that some had not already read and so she made one up. This became
the first Merry book.

Her friend and secretary, Marjory Taverner suggested she send it to a
publisher and to that end typed it for her. She sent it to Oxford University
Press and there were no problems about its acceptance; it was published in
1947. A little later, Winnie followed it with Merry again which is
dedicated to ‘Marjory for her help and interest’.

Oxford University Press sent Merry begins to the New Zealand
Listener to review. What happened next is a mystery. The editor, Oliver
Duff, told my husband, John, at the time a sub‑editor, that he had sent the
book to a librarian in the National Library Service (as it was then). He had
received the review, was unhappy about it and was debating returning it for
reconsideration ‑ something he had never done, he added. John read the review
and was told the name of the writer. We were both interested because she was
the sister of one of our friends (both have now been dead for many years).

The review, I understand, was returned unaltered and Oliver Duff published
it. In those days most, if not all, Listener contributions were signed
with initials and, possibly for that reason, I did not notice that they were
not those of the librarian. It was only when I unearthed the review for this
memoir that I began to wonder who actually had written it: and I have recently
been told that the editors of the early volumes of the Index to New Zealand
periodicals, who also had the unenviable task of identifying the owners of all
these initials, were also baffled by D.R.

The review is important because Winnie always blamed it for the
comparatively little recognition given to her books in this country. ‘It killed
my books’, she always maintained. She always believed that because of its
author’s status as a librarian with the National Library Service (Oxford had
told her that much ‑ and, it must be remembered, that in those days there
were few professional librarians) that her books were rejected by public
libraries. I think too that this experience made her more tolerant for many
years of the works of Enid Blyton.

Frank came back from the war, they were married and immediately left for
England where he was to continue his studies. Winnie continued to write. They
returned to New Zealand in 1952 and Frank began to practise in Wellington.
Winnie taught for a time at Wellington Girl’s College and Samuel Marsden
Collegiate and tutored in English on a part‑time basis at Victoria
University. In 1966 she became a member of the permanent staff. In between she
continued to travel whenever possible, to Australia, to Europe (especially to
Greece and Rome) and to the United States with always a visit to the Huntingdon
Library in Los Angeles.

She retired from Victoria University at the end of 1978. None of my children
had been fortunate enough to be students in her tutorials though she always
kept an eye on them. I am told she was an excellent tutor, considerate,
thorough, generous with her time and hospitable.

Frank was far from well in 1978. Shortly after Christmas Winnie phoned to
say he had been taken to hospital. He died in March, 1979. With hindsight I now
believe that Winnie’s own health had by then begun to deteriorate. It continued
to do so slowly and relentlessly. Eventually Alzheimer’s disease was diagnosed
and in 1986 it became necessary for her to be permanently hospitalised. For
some time she remembered Miss Murphy and our schooldays when all else had gone;
now, sadly, there is nothing.

Winnie wrote of the world she knew; indeed that was the advice given to the
young would‑be‑writers in The pen and pencil girls. She knew
nothing of ‘the kids down the street´ of the Merry begins review and,
I doubt whether Oxford in the 1940s, with overseas sales to consider, would
have been interested in such a background. I am told too, by former pupils,
that the the private schools of the time were just as she described them.

I was very pleased by Betty Gilderdale’s much more reasoned assessment of
her books in A sea change; 145 years of, New Zealand junior fiction
(Auckland:Longman Paul, 1982). It was almost too late. I read it to Winnie and
she was able to appreciate, albeit briefly, Mrs Gilderdale’s tribute.

´Our years in London were very full and very rich´ said Mrs Hall, on her
return to New Zealand with her husband, Dr G F Hall, after
three‑and‑a‑half years abroad. Headquarters in London was a flat in
Ealing. ´We were within five minutes’ walk of Ealing Studios, and it was not
uncommon while out shopping to find oneself in the middle of a shooting of a
film.´

Mrs Hall gave a large number of talks over the BBC. On one occasion,
following a talk on aspects of New Zealand school life, she received among
her “fan mail”, a letter from a former prefect at Columba College, Betty
Smith, who was staying in Edinburgh. Mrs Hall also met a number of authors of
children’s books. She herself was invited to speak at library functions in
many parts of Britain.

THE REVIEW
GIRLS AT SCHOOL

Clare Mallory was lucky in getting the Oxford University Press to take her
book ‑ a boarding school story set in New Zealand about supposedly New
Zealand girls. The school is at Dunedin (where the sun shines more often than
not), Auckland and Wellington are mentioned, there is a visit to a sheep
station in Canterbury (sheep aren’t mentioned), and the school year starts in
February. But that is about all there is of New Zealand in it. There is the
familiar plot of the unpopular prefect Winning Through with the help of the new
girl. But there are far too many House points, too much House pride and House
Honour. When perhaps eighty per cent of New Zealand children attend day and
mixed high schools, it is unfortunate that overseas readers are receiving such
a strange impression of the school life of our girls. Clare Mallory can write,
but I would like to see her talents used in a school story that will be about
the kind of school you and I went to, and about children like the kids down the
street.

Janet Maconie is retired and lives in Wellington. She is a librarian who has
worked for Lower Hutt Public Library, School Library Service and, since
retiring from SLS, various school libraries. For many years she was on the
management committee of the New Zealand Book Council and still contributes
regularly to its newsletter.